My latest work titled, The Converso Dilemma: Halakhic Responsa and the Status of Forced Converts. This is a more technical work but will hopefully prove helpful to those interested in the status of anusim.

The Amazon link for the book is below followed by a full description.

The Converso Dilemma: Halakhic Responsa and the Status of Forced Converts

The year was 1391. Spring was about to turn into summer. The Jewish communities of Castile and Aragon had undergone difficult times for more than thirty years. A civil war fought in the middle decade of the 14th century put Jews in a no-win situation. They were loyal and supported the ruling monarch and faced the ire of the pretender. If they had defected to the pre-tender, then they would have been labeled as traitors. The consequences could have been severe in either case and indeed proved to be so. Nevertheless, they survived.

What was once considered a Jewish problem to many Christians, was eventually supplanted by what some considered a much more hideous and sinister di-lemma. While their conversions had initially been met with a grand celebration by their Christian neighbors, those Jews who had yielded to baptism to rescue their lives and those of their families eventually proved a thorn in the side of the Church. Could they be trusted? Were they indeed faithful Catholics? Did they seek to undermine the boundaries which had once been so clear between Jews and Christians?
Those are fascinating questions in their own right.

Our concern, however, is the status of the individuals who converted under duress. Suspected by Christians, what was their status in Jewish law? How did the Jew-ish community view these individuals? What are the implications of these opinions in the present day?

Many questions concerning forced converts were sent to eminent rabbinic authorities for answers. This work seeks to answer those questions at least partly by reviewing the world of rabbinic responsa. This work assumes a degree of familiarity with the history of Jews in Iberia. It is a continuation of my work titled Secret Jews: The Complex Identity of Crypto-Jews and Crypto-Judaism, and some of the material presented in brief form there is included and expanded in this volume. 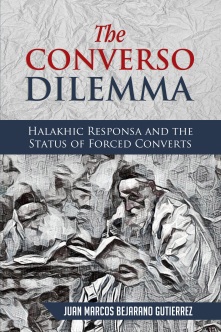 The first chapter of this present work is titled Definitions. It provides a summary of the terms commonly used to designate Jews who converted Christianity in the Iberian Peninsula and their descendants during the centuries we are reviewing. The goal of this chapter is to provide some historical context for the perception of Jews and Christians towards forced converts.

The second chapter is titled Rabbinic Responsa: A Limited Lens to the Past. The goal of this chapter is to explore some of the challenges that reading rabbinic responsa presents and understand their fascinating yet complicated window to the past. It also includes an example of the situations we are going to encounter.

The third chapter, titled Rabbi Isaac bar Sheshet and the Laws of Kashrut, discusses the topic of forced converts and the Jewish dietary laws. It addresses questions regarding the ability of forced converts to offer kosher food and wine.
The fourth chapter, Conversos, Jews, and the Issue of Marriage, discusses the validity of marriages contracted by Conversos in the Iberian Peninsula as well as divorces.

The fifth chapter, titled the Obligation of Levirate Marriage, discusses the subject of yibum, i.e., levirate marriage among Conversos.

Chapter six is titled Changing Views? and discusses whether rabbinic authorities altered the views on the Jewish status of Conversos.

The seventh chapter, The Uncircumcised Converso, investigates the status of the descendants of forced converts that had not undergone circumcision.

The last chapter, titled Priestly Lineage and Conver-sos, reviews the claims of the descendants of forced converts who claimed or were told they were Kohanim, i.e., priests.

The Converso Dilemma: Halakhic Responsa and the Status of Forced Converts