The Dominican friar Vicente Ferrer had participated in the onslaught of the Jewish communities in 1391 by eagerly accepting Jews at baptismal fronts in their efforts to be spared. Ferrer was convinced that the path forward was to instruct Jews in the reality of the Christian faith, by intimidation if not by force. With what must have been nothing less than dramatic, Ferrer journeyed the countryside with a Torah scroll in one hand and a cross in the other to reveal Christianity to Jews.1 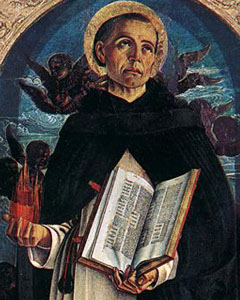 His drive was recognized by Pope Benedict XIII who sought to appoint him as his confessor. But Ferrer was driven by what he believed to be a higher calling- the conversion of Iberian Jewry. A description of Vicente Ferrer is provided in the Cronica de Los Reyes Catolicos authored by Hernando del Pulgar, the royal historiographer to Queen Isabella and King Ferdinand.

Ferrer outwardly rejected violence as a means of conversion, yet his desire to teach Jews would ultimately be done in a manner which for any observer would have been considered intimidating at the least. With the violence of 1391 fresh in their minds, another wave of conversions was on the horizon. This time, it had the official endorsement of Castilian court. Rabbi Joseph Ben Joshua ben Meir described Vicente Ferrer who followed Martinez in his assault on the Jewish community. Meir wrote:

“He was unto them a Satan [adversary] and stirred up against them all the inhabitants of the country, and they arose to swallow them up alive, and slew many with the edge of the sword, and many they burned with fire, and many they turned away with the power of the sword from the L-RD, the G-d of Israel. And they burned the books of the Law of our G-d, and trampled upon them the mire in the streets: and the mother they dashed in pieces upon her children in the day of the L-RD’s wrath…And some of them killed their sons and daughters that they might not be defiled…Those who were compelled to be baptized became numerous in the land of S[e]phard [Spain] and they put upon them a mark of distinction unto this day…And the Jews went out from the accursed country which the L-RD had cursed…Also upon the Jews that were in Savoy did this grievous oppressor turn his line of desolation. And I have seen in the book Mischath Marehu how they hid themselves in the castles of Savoy in those evil days. And this Belial was in their sight a saint…” 3

By Rabbi Juan Bejarano-Gutierrez the director of the B’nei Anusim Center for Education and author of What is Kosher?